The Promise of Jesus 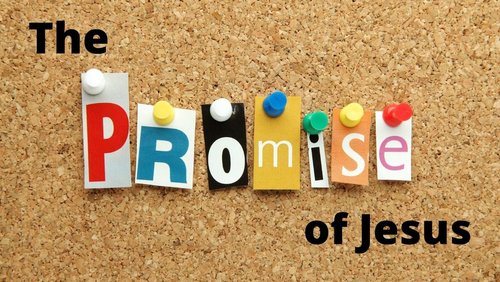 Have you ever been promised something, and it seems to be taking ages for that promise to be fulfilled? Perhaps a company has promised that they have sent something to you, and it hasn’t arrived, perhaps your husband has promised to do some DIY and six months have passed, perhaps you have put your promises in boss who has said when things get better, I will give you a pay rise, or perhaps you have voted for a politician based on a promise of much better future. Are you still waiting for some of those promises to be fulfilled? Are you waiting for that DIY to be done? Are you waiting for that pay rise?

You see there is a thing about promises they are often not time specific.

But I do wonder what it would have been like if we were born into the Israelite Nation 2100 years ago. I wonder would be having doubts about God’s promises.

The first thing we need to know is that God is trustworthy, and He has a plan. The Old Testament where we will spend our time today points towards Jesus, laced throughout the Old Testament God promises a saviour. The earliest point can be found in Genesis 3

15 And I will put enmity

between you and the woman,

and between your offspring and hers;

he will crush your head,

and you will strike his heel.”

Here God speaking to the Satan tells him that there will be a day of reckoning that he will be defeated.

Later in 2 Samuel we can read that God promises King David that from his line would come the final ruler, the saviour.

16 Your house and your kingdom will endure forever before me your throne will be established forever.’”

This is the genealogy of Jesus the Messiah the son of David, the son of Abraham:

Jacob the father of Judah and his brothers,

3 Judah the father of Perez and Zerah, whose mother was Tamar,

Perez the father of Hezron,

Hezron the father of Ram,

4 Ram the father of Amminadab,

Amminadab the father of Nahshon,

Nahshon the father of Salmon,

5 Salmon the father of Boaz, whose mother was Rahab,

Boaz the father of Obed, whose mother was Ruth,

Obed the father of Jesse,

6 and Jesse the father of King David.

David was the father of Solomon, whose mother had been Uriah’s wife,

7 Solomon the father of Rehoboam,

Rehoboam the father of Abijah,

Abijah the father of Asa,

8 Asa the father of Jehoshaphat,

Jehoshaphat the father of Jehoram,

Jehoram the father of Uzziah,

9 Uzziah the father of Jotham,

Jotham the father of Ahaz,

Ahaz the father of Hezekiah,

10 Hezekiah the father of Manasseh,

Manasseh the father of Amon,

Amon the father of Josiah,

11 and Josiah the father of Jeconiah and his brothers at the time of the exile to Babylon.

12 After the exile to Babylon:

Jeconiah was the father of Shealtiel,

Shealtiel the father of Zerubbabel,

13 Zerubbabel the father of Abihud,

Abihud the father of Eliakim,

Eliakim the father of Azor,

14 Azor the father of Zadok,

Zadok the father of Akim,

Akim the father of Elihud,

15 Elihud the father of Eleazar,

Eleazar the father of Matthan,

Matthan the father of Jacob,

16 and Jacob the father of Joseph, the husband of Mary, and Mary was the mother of Jesus who is called the Messiah.

The promise made to David took nearly approximately 1000 years to come to fulfilment.

God told the Israelites that Jesus, the Messiah would be born in Bethlehem

2 “But you, Bethlehem Ephrathah,

though you are small among the clans[a] of Judah,

out of you will come for me

one who will be ruler over Israel,

whose origins are from of old,

The Old Testament finishes in Malachi,

With a further promise

“See, I will send the prophet Elijah to you before that great and dreadful day of the Lord comes. 6 He will turn the hearts of the parents to their children, and the hearts of the children to their parents; or else I will come and strike the land with total destruction.”

The silence for approximately 400 years. What were the Israelites thinking? During this silence the Romans would come to prominence and occupy Jerusalem. Were people thinking has God forgotten us? Were they thinking has He forgotten His promises?

No, God had not. We know how it turns out. Jesus is born, John the Baptist proclaims the imminent start of Jesus’ ministry.

I cover these promises to bring us two points of application:

If God promises something it will happen. The biggest issue with this is us. Let me explain.

We want things quickly; we want things on our timescale. Patience is not something that it is readily expressed in society. Buy now pay latter, fast food, express delivery, debt of saving. Get rich quick schemes, stealing things because we can’t afford them. We must accept that God may have a different timescale to us.

I felt called by God to ministry, I spoke to the church I was in, would they support me in this call, no was the answer, wasn’t the right time. Could have thrown my toys out of the pram, felt like it but thankfully I was patient.

Often the Israelites would try and speed up God’s promises, or loss patient. Abraham bore a son with His wife’s maid, not wanting to wait for Sarah to become pregnant.

We need to learn to be patient.

The second application is we need to trust God. God has a plan; we need to get on board with what He is doing.

God told satan that he would be defeated.

God told the Israelites where the Messiah would be born.

If God says it, you can trust in it.