God Can Use Anyone 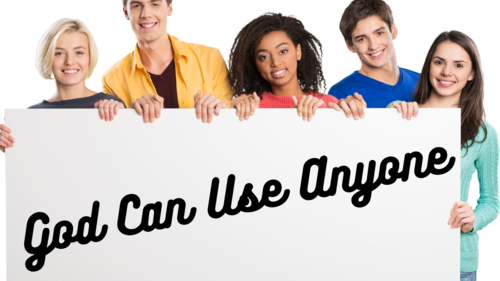 Have you ever wondered if God can use you? Perhaps you are thinking Adam you do not realise what I have done, I have done some horrendous things, I have committed unspeakable crimes, I have been unfaithful to partner, I have stolen, I have lied, I have repeatedly put myself before others, surely God can not use me, it is enough that I have been saved. Maybe it is not because of your past actions but you feel uneducated, that you will not be taken seriously.

I want us to explore all be it briefly the life of the Apostle Paul, we will also look briefly at a couple of the disciples, primarily their occupations.

Paul was not originally called Paul, we are introduced to a man called Saul (who’s name would be changed to Paul) in Acts 7, let us read a few verses

57 At this they covered their ears and, yelling at the top of their voices, they all rushed at him, 58 dragged him out of the city and began to stone him. Meanwhile, the witnesses laid their coats at the feet of a young man named Saul.

59 While they were stoning him, Stephen prayed, “Lord Jesus, receive my spirit.” 60 Then he fell on his knees and cried out, “Lord, do not hold this sin against them.” When he had said this, he fell asleep.

8:1 And Saul approved of their killing him

On that day a great persecution broke out against the church in Jerusalem, and all except the apostles were scattered throughout Judea and Samaria. 2 Godly men buried Stephen and mourned deeply for him. 3 But Saul began to destroy the church. Going from house to house, he dragged off both men and women and put them in prison.

So, our first introduction to this man Saul was that he stood on and approved of the killing of Stephen, followed by his setting out to destroy the church, talk about a man on a mission.

What more can we piece together about Saul.

1 “Brothers and fathers, listen now to my defense.”

2 When they heard him speak to them in Aramaic, they became very quiet.

Then Paul said: 3 “I am a Jew, born in Tarsus of Cilicia, but brought up in this city. I studied under Gamaliel and was thoroughly trained in the law of our ancestors. I was just as zealous for God as any of you are today. 4 I persecuted the followers of this Way to their death, arresting both men and women and throwing them into prison,

These four verses give us a clear picture of Saul/Paul,

He was a Jew

He studied the Jewish law under Gamaliel, a prominent teacher, I read this quote on Britannica.com

“When Rabban Gamaliel the Elder died, regard for the Torah ceased, and purity died”

Saul was zealous for God, yet He persecuted the followers of the Way, the Way was the name given to followers of Jesus. Saul believed what He was doing was right.

Can we see similarities today, not only in areas of religion but in other aspects of society?

Saul failed to accept who Jesus was and went to great lengths to persecute unto death those who claimed Jesus was the Messiah.

At this point I think it is fair to say that this Saul is unlikely candidate to be used by God, but then He meet Jesus.

Meanwhile, Saul was still breathing out murderous threats against the Lord’s disciples. He went to the high priest 2 and asked him for letters to the synagogues in Damascus, so that if he found any there who belonged to the Way, whether men or women, he might take them as prisoners to Jerusalem. 3 As he neared Damascus on his journey, suddenly a light from heaven flashed around him. 4 He fell to the ground and heard a voice say to him, “Saul, Saul, why do you persecute me?”

“I am Jesus, whom you are persecuting,” he replied. 6 “Now get up and go into the city, and you will be told what you must do.”

On the road to Damascus Saul was meet by Jesus, it was a powerful moment, Saul did not immediately recognise who Jesus was, verse 5 tells us Saul asked who are you, Lord.

When he got the answer, I am Jesus who you are persecuting I wonder went through Saul’s mind, something along the lines of “Uh oh I am in trouble”

It is worth noting that Jesus is saying when someone persecutes Christians, they are persecuting Him, Jesus identifies with our persecution.

Saul perhaps thought that was it, finished, but God had other plans, Saul would be used,

But the Lord said to Ananias, “Go! This man is my chosen instrument to proclaim my name to the Gentiles and their kings and to the people of Israel.

Because Saul/Paul met Jesus he would go onto to boldly proclaim the Good News of Jesus, we have a number of his letters in the New Testament, He went from persecutor to proclaimer, from enslaver, to freedom bringer,

Our past is our past, we cannot change it however much we would like to, our past has consequences, some of our actions may have an effect on us know (I want to give an example), perhaps in the past you got caught up in consumerism and spent too much, you may be paying that money back, that is a consequence, may be you have a criminal record that you have to declare, that is a consequence, does this mean God cannot use you? No, our past doesn’t have to shape our future, who you were before Jesus got hold of you doesn’t have to be the person you are now. God transforms us, wipes the slate clean, live the life God has called you to.

16 But whenever anyone turns to the Lord, the veil is taken away. 17 Now the Lord is the Spirit, and where the Spirit of the Lord is, there is freedom. 18 And we all, who with unveiled faces contemplate the Lord’s glory, are being transformed into his image with ever-increasing glory, which comes from the Lord, who is the Spirit.

Turn away from your past, do not let it entrap you, rule you, turn to Jesus and find freedom to live. Turn to Jesus and let Him use you. Because He can and He will. Everyone of us has a role to play, right here right now.

You may be sitting/watching this and saying well Saul was an educated man, I am not that knowledgeable, well

Jesus’ first disciples were fisherman, in Acts they are recorded as being ordinary, unschooled

When they saw the courage of Peter and John and realized that they were unschooled, ordinary men, they were astonished and they took note that these men had been with Jesus.

Jesus took people who at their time were unschooled, ordinary men and used them mightily.

Jesus took me, a self-centred, consumer driven man, who in his RE exam got an F and turned me into a Pastor, helped me get a degree, I am not intellectual, I can’t spell my grammar is appalling but Jesus said I can use you, Adam.

Are you willing to let go of your past?

Are you willing to stop being defined by your past?

Are you willing to stop conforming to your old ways?

Are you willing to step into what God has for you?