What is the Kingdom of God? 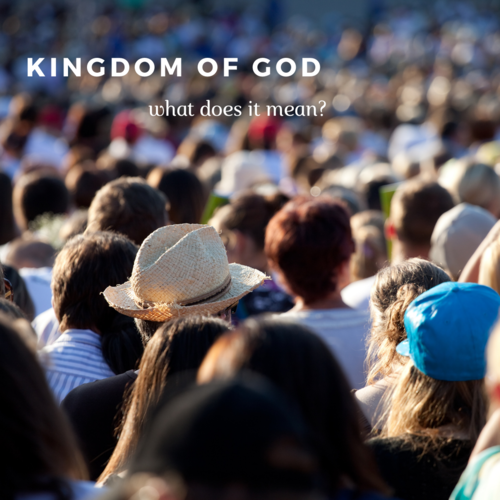 What is the Kingdom of God?

“This, then, is how you should pray:

“‘Our Father in heaven,

hallowed be your name,

your will be done,

on earth as it is in heaven.

11 Give us today our daily bread.

12 And forgive us our debts,

as we also have forgiven our debtors.

13 And lead us not into temptation,

but deliver us from the evil one.

Why did I start with this well-known prayer? A prayer that many of us if not all of us will have said or heard at one time. It is the prayer that Jesus taught His disciples when they asked Him how they should pray. This prayer contains so much but I wanted us to focus in on verse 10:

your kingdom come, your will be done,

Why do I want us to focus on your kingdom come? Because it is central to Jesus’ message.

From that time on Jesus began to preach, “Repent, for the kingdom of heaven has come near.”

“The time has come,” he said. “The kingdom of God has come near. Repent and believe the good news!”

But seek first his kingdom and his righteousness, and all these things will be given to you as well.

So, Jesus announced the Kingdom of God was near, taught His disciples to pray to God asking for His Kingdom to come it has got to be important so,

What does your Kingdom come mean?

Does it have different meanings, different connotations in the bible?

Traditionally if you look up Kingdom in the dictionary you would see a definition for a Kingdom that means a country and area that has a head of state who is a King or Queen. The United Kingdom is an area that has a Queen as head of state, her power is limited but if we go back in time, Kings and Queens had substantially more power, they ran their Kingdoms, their word was law.

If we go back further in time, to the times recorded in the bible we see many examples of Kings ruling their lands.

Israel asked God to give them a King to be like the other nations around them. At the time of Jesus’ birth Judea was an occupied country, the Roman Empire was the occupier and had given authority to Herod the Great, which then passed on to his son called Herod Antipas to rule over Judea. The Jews were waiting for the Messiah to come, they were expecting a King to be born who they thought would free them from the rule of the Roman empire.

Theology around the Kingdom of God is forms part of our eschatology.

I would like to reference some authors I have read:

“For Jesus, the Kingdom was a reign more than a realm, a power more than a place” Craig Blomberg

Ladd explains that yes Kingdom may be a realm, a place that some rules over but that is secondary to right, the sovereignty, the authority to rule.

In this post I wish for us to continue to focus on authority to rule.

You may ask why do we need to ask for God’s Kingdom to come? If God is not ruling the earth now who is?

Let us turn to where satan tempted Jesus in

5 The devil led him up to a high place and showed him in an instant all the kingdoms of the world. 6 And he said to him, “I will give you all their authority and splendour; it has been given to me, and I can give it to anyone I want to. 7 If you worship me, it will all be yours.”

Here we see that satan has been given authority over the earth, that authority has been granted by God, hard for us to grasp, but because of the fall, satan was granted authority on earth. Please note satan is not a god, it is by permission he has authority.

So, we see satan is at work.

When we pray your Kingdom come, we are asking God to reign, to rule. To take the place of the rule of satan.

I would like us to go back to Matthew 6:33 again

But seek first his kingdom and his righteousness, and all these things will be given to you as well.

A synonym of seeking is to pursue, we are to pursue his Kingdom, His reign first.

Seek is a verb, it requires us to act, I would argue that it is a continual thing, that we continue to see first God’s rule and reign in our lives. It should be a continual active part of our lives.

The Kingdom of God has three different expressions in the bible, the authority to rule, a realm we can enter and a future realm.

We are to seek first the Kingdom of God, to seek His rule for our lives.

So, as we are looking to advance the Kingdom let us start by praying the Lord’s prayer:

“This, then, is how you should pray:

“‘Our Father in heaven,

hallowed be your name,

your will be done,

on earth as it is in heaven.

11 Give us today our daily bread.

12 And forgive us our debts,

as we also have forgiven our debtors.

13 And lead us not into temptation,

but deliver us from the evil one.

Check out this video on what the Kingdom of God means.